In the United States, society teaches us from a young age that it’s bad to stereotype; that stereotypes are wrong.  Stereotypes are mean, incorrect, de-individualizing assumptions.  This is especially true when paired with race/nationality – NEVER stereotype about a those!  Which is why it is mind blowing to even consider that Mexico did this back in 1986: 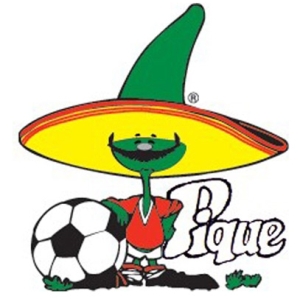 As the host country for the World Cup, Mexico was given the task of creating a mascot for the biggest sporting event in the world.  Their decision making method?  Putting together every single stereotype of Mexico, and shoving it into character form.  So Pique, a picante pepper, grew out his mustache, put on his airy, brightly coloured v-neck, woven shoes, and sombrero and cheered with the best of ’em.
Yes, there was a physical mascot too, but unfortunately not a costumed one.

Some nations were not very happy with the stereotype approach, and refused to endorse the event if this was the image.  So the official image was this:

Even though this idea would have been much better (though less informative):