Today’s mascot of the day sits near and dear to the hearts of many friends.  Well, probably not the mascot, but the team itself.

The Charlotte Knights are AAA for the Chicago White Sox, and from 1989-2011 played in Fort Mill, SC, until moving into downtown Charlotte.  As if their leaving the state was not sad enough, they also changed from the Hornet’s teal and purple colour scheme, to the white, black, and silver of the White Sox.  Booo!!!
You’d think as the Knights, they’d have a knight.  But baseball mascots never make sense, so instead they have Homer the Dragon. 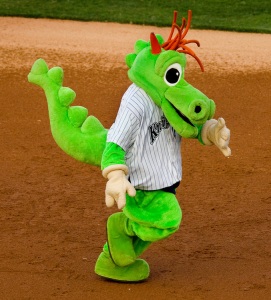 The Charlotte Knights baseball mascot during the 2008 season.

This cutie was born in 1989 as the guard of Knight’s Castle!
You’d think that after working for them for 25 years, they’d get him clothes that fit.  Or maybe I’m not up with the mascot fashion these days– it’s about the snug, button busting fit. 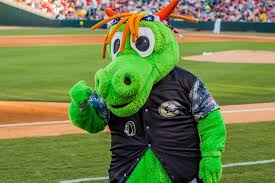 Either way, I think you are awesome, and promise to attend a game this year!